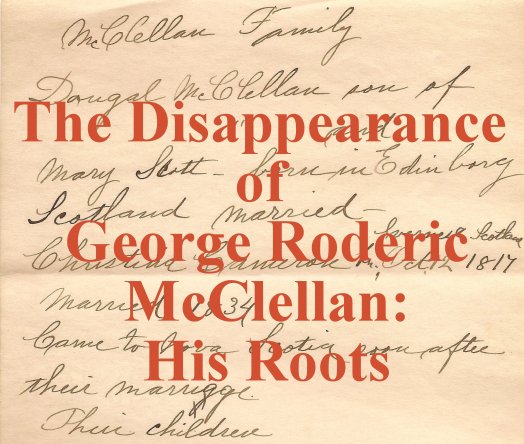 Imogene (Everson) McClellan was an avid genealogist. About 1903, several years after her husband George Roderic McClellan disappeared, Imogene began compiling her own genealogy. While doing so, she wrote on a small slip of paper all that she could remember about George McClellan’s immediate family, and gave it to her daughter Lillian McClellan. Lillian’s grandniece Maria McClellan discovered it years later, when she inherited Lillian’s papers. It was the first clue to discovering the origins of George Roderic McClellan. 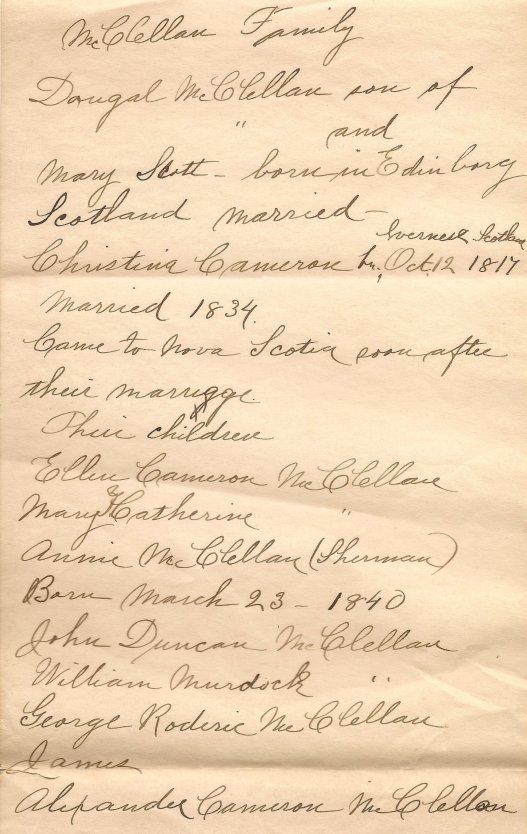 McClellan Family Genealogy, written by Imogene (Everson) McClellan for her daughter Lillian McClellan, circa 1903. Image courtesy of the author.

George Roderic McClellan was born 8 May 1848 in Pictou County, Nova Scotia, the youngest of eight children born to Dougal McClellan and his wife Christina Anne Cameron, who was also called Christiana Cameron. Dougal died when George was young and the widowed Christina, unable to support all of her children, had to place them in local homes, working as domestic servants or learning trades. While the specifics of George’s childhood are still elusive, he was likely placed in a home where he apprenticed as a mason. By the age of 12 his mother had left Nova Scotia entirely and was working as a domestic servant in the household of Dr. Charles W. Fabyan of Providence, Rhode Island, a wealthy Methodist physician originally from Maine. George’s eldest sister Mary Catherine followed their mother, where she soon found work as a governess in Providence. George’s second eldest sister, Christina Anne “Annie” McClellan, found work in Portland, Maine, where she met merchant John Doane Wells Sherman. They identified themselves as husband and wife in the 1860 Census in Portland, but their wedding was performed 14 January 1863 in Providence, Rhode Island. When George turned 21 he decided to move from Nova Scotia to seek work in New England, arriving in Portland, Maine in September 1869 and then making his way to Boston, Massachusetts. He may have gone to meet up with his sister Annie (McClellan) Sherman, whose husband John worked in Boston. John D. W. and Annie Sherman boarded at Adams House when they stayed in Boston. Together John and brother Thomas B. Sherman operated the trading company Sherman Bros. & Co. at 234 State Street from at least 1867-1870. As of the 1870 census, ‘Geo R. McClellan’ was working as a mason and boarding in Boston, Massachusetts with grocer Martin Godrin (29, b. Ireland). 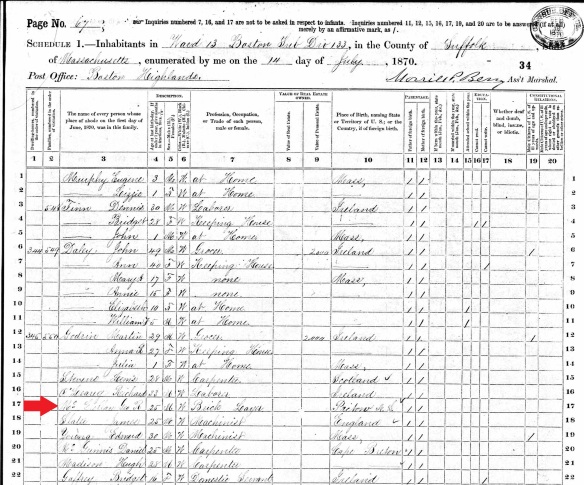 In the spring of 1872 Barnabas Everson hired George McClellan to help with construction at his South Hanson saw-mill, including a tall brick chimney stack to help reduce the threat of fire from the wood-scrap-drive fires which help fueled the saws. George likely took the Old Colony train from South Station in Boston to the South Hanson train station, located right next to Everson’s mill on Main Street. The train station is still in use today. By 1888 Barnabas Everson had become the fifth-richest man in Hanson, MA, through income derived from his sawmill and from his agricultural produce on his 300+ acres of farmland.  [See my article about Barnabas Everson’s safe, which is held by the Hanson Historical Society]. Everson invited the 24 year old George McClellan home for dinner, where he met Barnabas’s 20 year old daughter Imogene. 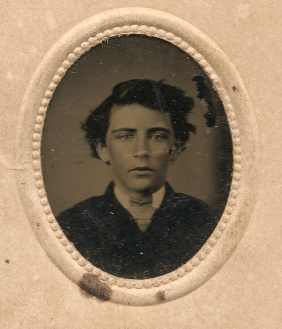 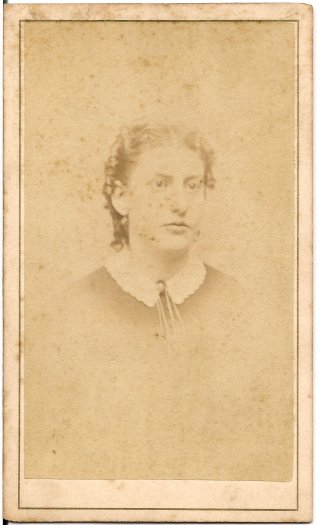 Undated image of Imogene Lillian Everson.  Photographer A[mos] H. Locke, 16 Main St., Plymouth, Mass. Possibly near the time of her marriage, Locke was a photographer in Plymouth in 1872. Courtesy of the author.

They courted and were quickly married in Barnabas Everson’s home on Indian Head Street in Hanson, 3 June 1872, by East Bridgewater Methodist minister Rev. William Freeman Farrington. The choice of a Methodist minister probably reflected George McClellan’s faith with his Scottish-Canadian roots rather than the Everson family’s religion. Barnabas Everson joined several faith groups throughout his life, as did his children Richard and Imogene Everson. As a child, Imogene was briefly raised in the South Hanson Baptist Church. By the mid-1850s, however, the Eversons became captivated by the Spiritualist movement and remained Spiritualists until the 1890s. In the 1890s Imogene began taking Christian Science courses from Mary Baker Eddy. She remained a member of Church of Christ Scientist until her death.

Having no property and little cash to his name, George and his new wife Imogene McClellan moved into a rent-free house on the east side of Indian Head Street near Maquan Pond in South Hanson owned by Imogene’s mother, Deborah (Bates) Howland Everson. Deborah had lived there with her first husband, Warren Howland, until he died of consumption in 1846, followed shortly thereafter by the death of their infant son and only child Warren Howland Jr. After the 1848 marriage of the widowed Deborah (Bates) Howland to Barnabas Everson they rented out the Howland house for extra income, and Barnabas and Deborah  Everson moved into a newly built house across the road on the west side of Indian Head Street, where they raised their family, including daughter Imogene. In 1873 new father George McClellan was seemingly well situated to step into the family businesses which his father-in-law Barnabas had founded.

Barnabas Everson, like George McClellan, had trained as a mason and trained as a shoemaker, which he worked at when construction opportunities were unavailable or off-season. Barnabas was a talented businessman and soon began acquiring tracts of farmland, woodlots, and cedar swampland in South Hanson, turning his talents to market gardening and selling his agricultural products to larger towns on the South Shore and Boston. He built a sawmill by the South Hanson train station, using lumber from his woodlots and swampland in the cedar swamp in South Hanson, which manufactured box boards and shingles. Everson later sold the sawmill to John Foster and continued to farm until his death.

Everson’s eldest son, Richard A. Everson, two years older than his sister Imogene, followed in his father’s footsteps but also went his own way in business. In his teens, Richard apprenticed and worked as a shoemaker for several years before going to work in Barnabas’s sawmill. Richard then took an interest in cranberry farming and began acquiring a large number of cranberry bogs in Hanson. He invented the “Cape Cod Champion Cranberry Picker” and eventually became the director of the New England Cranberry Sales Company. Richard’s “varied interests are indicative of his enterprise and versatile mind, and the success he has made in his different undertakings shows his executive force,” according to a biography.

Perhaps the career of Richard A. Everson can provide some insight into his brother-in-law George R. McClellan’s next steps. Family stories, you may recall, suggested that George McClellan may have moved to Denver after leaving his family in Hanson, Mass. behind in the 1890s. But it turns out that George went to Denver much earlier than that, and not only once, but two times during his marriage to Imogene.

Hoping to strike it rich in the pioneer town, George McClellan first left for Denver in late 1873, leaving behind his wife Imogene and their infant son George. Gold and silver were mined in Colorado and then filtered through the city of Denver, where business and real estate opportunities abounded in the rough-and-tumble city. After a childhood spent apart from his family, and his adolescence and young adulthood spent moving from place to place in search of employment, he had finally formed roots in Hanson, Massachusetts with his new family. But after one year he was itching to move again, and this time -West.

But what led to such a huge move? A handsome and cocky young man, George likely bumped heads with his father-in-law Barnabas Everson. Although the two men seemingly had much in common, it appears that George McClellan was unwilling to step into his father-in-law’s business and wanted to come into wealth on his own. Barnabas Everson may have been a hard man to work under, since even his own son Richard A. Everson only spent a few years working in Barnabas’ saw mill before starting his own cranberry company in Hanson and building his own success in tandem with his father. However, if Barnabas and his son Richard had disagreements, they nevertheless worked closely together, both on a personal level and physically within the same town. For some reason, however, George McClellan wanted to put 2,000 miles between them. Barnabas himself had an appreciation for risk-taking, having successfully grown his own businesses from small start-ups into large, successful operations. Perhaps George heard about business opportunities from his brother-in-law John D. W. Sherman, whose trading company was also booming in the 1870s. And perhaps at first George even received seed money from Barnabas Everson to support his endeavors in Denver.

But would George McClellan strike it rich in Denver?

Previously: Part One: The Disappearance of George Roderic McClellan

6 thoughts on “Mystery Monday: The Disappearance of George Roderic McClellan: His Roots”