Barnabas Everson of South Hanson, Plymouth County, Massachusetts (4 January 1825 – 22 February 1896) was a prominent citizen of the town, a wealthy businessman with major landholdings. His parents and grandparents were from the town of Hanson (or the part of Pembroke which became Hanson in 1820), and his children and grandchildren were born and raised in the town. It wasn’t until a recent inspection of the record of his marriage to the young widow Deborah (Bates) Howland (4 September 1819 – 16 April 1892), recorded at Hanson, that I noticed that their marriage was performed by an unexpected person: the mayor of New York City.

Marriages registered in the Town of Hanson for the year 1848-9, Isaiah Bearce, Clerk

Residence of Each at Time of Marriage: Hanson & Hanson

Age of Each in Years: [Blank] & [Blank] Occupation of Groom: Mason

Place of Birth of Each: Hanson & East Bridgewater

Name and Official Station of Person By Whom Married: W[illiam]. F[rederick]. Havemeyer, Mayor of N.Y. City

Their marriage was also record at Manhattan, in the New York City Marriage Registers, v. 1-3, 1829-1860 [FHL Film no. 1671673], which was organized alphabetically by the first letter of the groom’s surname. The marriage record stated: 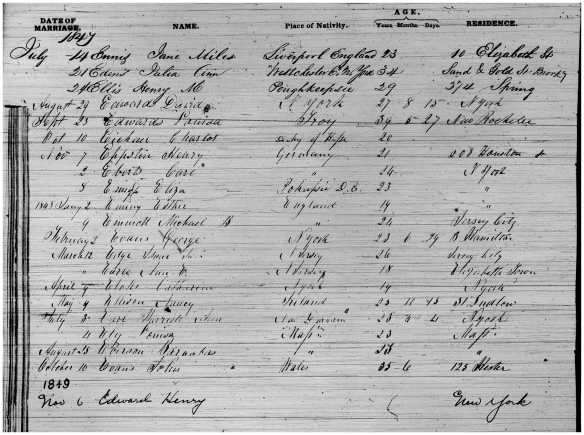 Barnabas generated an abundance of records throughout the course of his lifetime, with no obvious connections to Manhattan. Anyone know of a historical trend of couples traveling to Manhattan from rural New England towns to be wed?

[Genea-blogger John Newmark (author of TransylvanianDutch) started Amanuensis Monday: “A person employed to write what another dictates or to copy what has been written by another.”]