“An eight year old daughter [Bessey Martha Eason] of Daniel Eason, colored, who resides on Prospect Street, in this city, was so horribly burned by her clothing being set on fire Saturday morning that she died yesterday. It seems that Mrs. [Sarah Jane] Eason had left her three children abed about half past 6 in the morning to go to Mrs. Russel’s, where she had been engaged to work. Mr. [Daniel] Eason, who went away earlier in the morning, was returning to the house in order to take the children up and give them their breakfast, as he had often done before when his wife was obliged to go away early, was met by a man who told him that his child had been horribly burned. The only evidence they have as to how the child’s clothing came on fire is from the two remaining children, aged 2 [Frank] and 5 [Daniel Jr.] years respectively. The oldest child [Daniel Jr.] says that the youngest [Frank] lit a stick in the fire and then touched it to his sister’s dress. After the child’s clothes were on fire, she rushed into the door yard and was met there by an Ayer boy who had been attracted by her screams. He tried to remove her clothing, but finding that impossible took off his coat and smothered the flames. Dr. Webster was called and his directions followed, but to no purpose, the child dying about 10 o’clock yesterday morning in great distress.”

Prospect St., Augusta, Maine, where the family of Daniel Eason lived. From 1878 Bird’s Eye Map of Augusta, courtesy of the Library of Congress.

Daniel C. Eason, born circa 1833 in Norridgewock, Somerset, Maine, was the youngest son of Augusta’s Freewill Baptist minister John Eason and his second wife Catherine. He moved as an infant with his family to Augusta, Maine. As a “babe in arms” he was held by his father John Eason when the Eason family witnessed the hanging of murderer Joseph Sager in Augusta in 1835.

Daniel and Hannah separated sometime between 1870 and 1875, and Hannah and their teenage children moved to Boston, Massachusetts. Once there, the spelling of their surname became Eastman rather than Eason.

Daniel then published marriage intentions on 19 June 1876, and married in Augusta on 21 August 1876, Sarah Jane Smith, a possibly multiracial English woman [who was called Sarah Jane Gloss in their marriage intention]. In 1880, she was listed as black and born in England, the daughter of a father born in the West Indies and a mother born in New Brunswick. She was listed in 1885 as black, born in England with parents born in Virginia.

By 1882 the family had moved from Waterville, Maine back to Augusta, Maine where Daniel C. Eason worked as a hostler.

“Mrs. Russel” who employed Sarah Jane Eason was possibly Nancy, the widow of Israel Russell, who in 1882 lived on Winthrop St. in Augusta, near the Eason home on Prospect St. The “Ayer boy” who attempted to put out the fire on Bessey Eason may have been a family member or employee of candy peddler John C. Ayer who lived on High St., behind the Eason family on Prospect St. “Dr. Webster” who tended to Bessey Eason’s burns was Augusta physician John Ordway Webster, a Harvard graduate who began his Augusta practice in 1875.

Following the tragic death of Bessey Martha Eason, the family left their home on Prospect St. in Augusta, Maine and moved to Providence, Rhode Island, where Daniel worked as a hostler in a Providence tavern, and the spelling of their surname transitioned to “Eastman”. Bessey Martha Eason’s birthplace was listed as Rhode Island in the 1880 Census, so it is possible the family had moved briefly to Providence in the mid-1870s and then returned to Augusta, Maine. Bessey, born circa 1874, may have been an illegitimate child of the couple, who then moved to Augusta where they were married in 1876 (or perhaps she was a child of only Sarah Jane). In February 1885, Daniel and Sarah Jane had another son, George W. The family was enumerated on 1 June 1885 in Ward 6, Providence, R.I., as Daniel C. Eastman (53, b. Me., hostler), wife Sarah J. (51, b. England, illiterate), and children Daniel C. (8), Frank (5), and George W. (4 months). The family moved to Cambridge, Massachusetts by February 1886, when they retroactively recorded George Eastman’s birth record in Cambridge. They perhaps moved to Massachusetts to be closer to Daniel Eason’s children from his first marriage.

Sarah Jane (Smith) Eastman died sometime prior to 1900, and Daniel C. Eason/Eastman reunited with his first wife Hannah. They lived together in Hyde Park, Massachusetts in the 1900 Census, and Daniel was enumerated at Hannah’s address in Hyde Park throughout the early 1900s in Boston City Directories. In 1910, Daniel C. Eastman was listed as a widowed black farm laborer, boarding and working for Daniel M. Hardy in Pepperell, Massachusetts. However, he again was listed as a resident of Hyde Park living with Hannah until her death in Hyde Park in 1916. A death record for Daniel C. Eason/Eastman has not yet been identified.

No gravestone has been identified for Daniel’s daughter Bessey Martha Eason, but she may have been buried in either Mount Hope or Forest Grove Cemetery, both located close to the Easons’ house on Prospect Street in Augusta, Maine.

Bessey Martha Eason’s young brother Frank Eastman, who accidentally set the fire which led to her death, went on to marry in Massachusetts and serve in the Philippine-American War. He married in Boston, 14 April 1898, Georgie Ellinor Gray, and they had two daughters born in Boston: Sarah Lavinia Eastman (b. 16 Sept. 1898) and an unnamed daughter born in 1900 who likely died young. Frank Eastman served in Company D and M in the 9th Regiment of the U.S. Calvary, a black regiment. He died 3 January 1902 in Nueva Cáceres in the Philippines and was buried there. His body was disinterred and brought back to the U.S. on 21 November 1903, and he was buried in Arlington National Cemetery in Virginia. 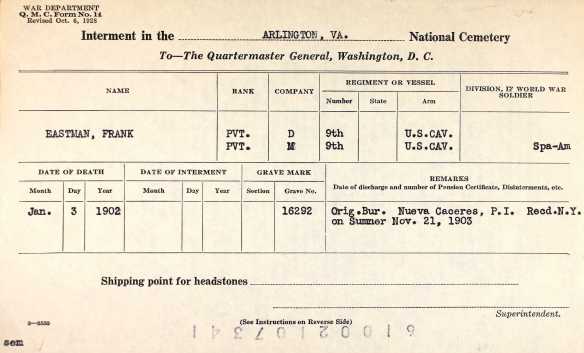 Frank’s widow Georgie received a widow’s pension following his death in 1902. Frank’s brother Daniel C. Eason/Eastman Jr. named a son Frank in honor of his brother who had died so far from home.

Previously: Part One: The “Man of A Century”: Parson John Eason of Augusta, Maine