While visiting my brother-in-law in Yorkshire, we made a day trip to the town of Ripley in North Yorkshire. We wandered around the castle for a bit, grabbed a delicious ice cream cone, and afterwards made our way to the All Saints Church and its surrounding graveyard. 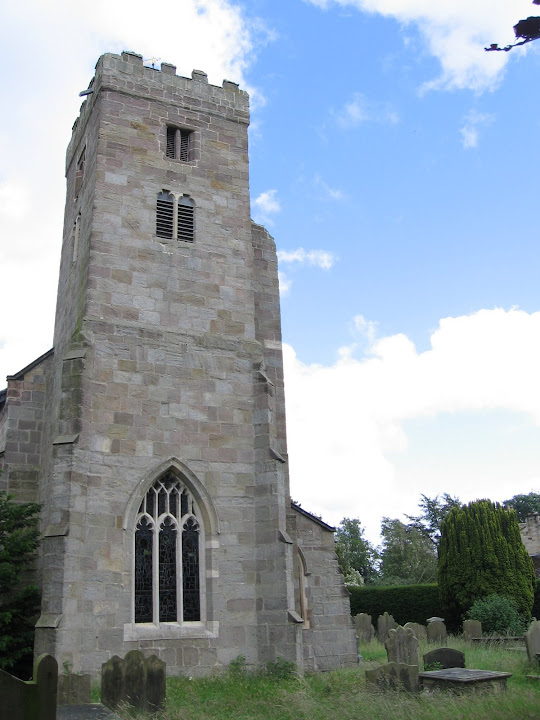 The church dates to the 14th century, and features a very old “weeping cross” where pilgrims and penitents kneeled in prayer. The cross has been lost to time, replaced by stones at the base of the cross. There are only two weeping crosses known in Britain, it is believed that this cross was built around the the construction of the church in the 14th century (part of the original church structure is now sinking into the ground and is referred to as the “Sinking Chapel”): 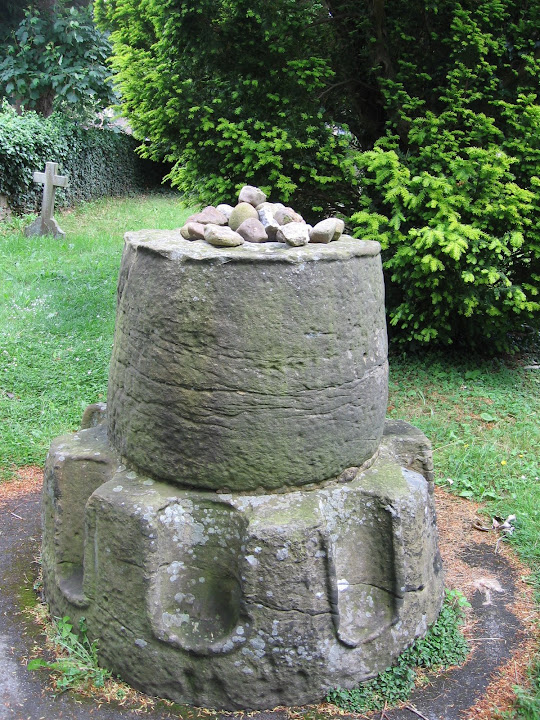 The church itself was rich in history. Along one of its walls, Cromwell’s Parliamentarian soldiers executed Royalist prisoners after the battle of Marston Moor during the First English Civil War (1644). 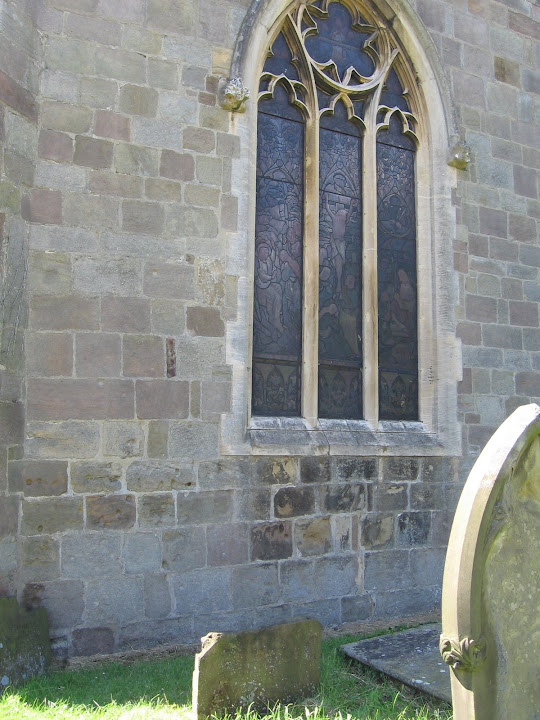 Church Wall with bullet holes at All Saints Church

Here is a closeup of the bullet holes which remain in the wall: 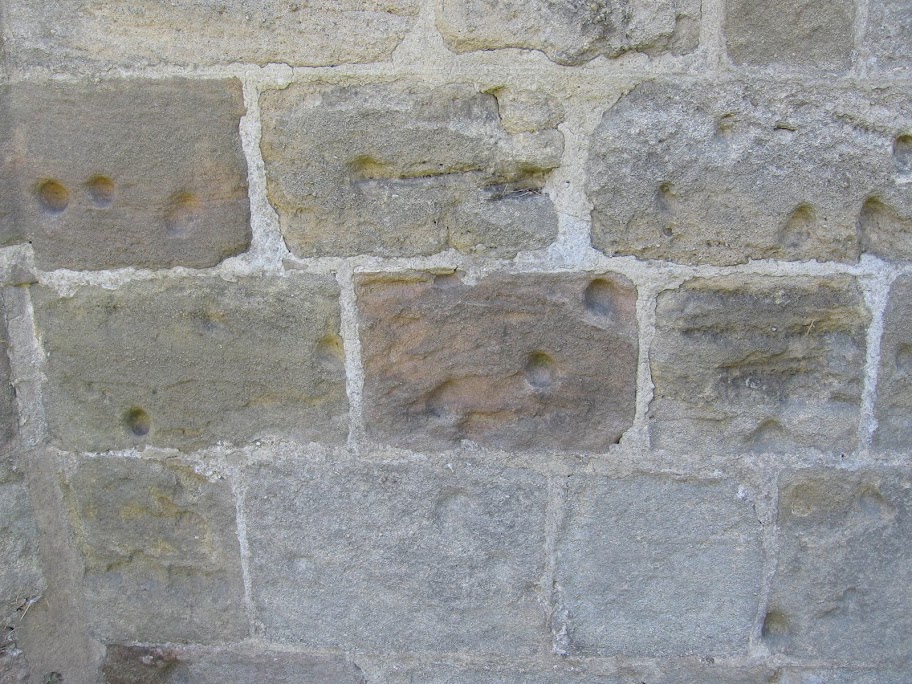 Closeup of Bullet Holes in a Church Wall Left By Cromwell’s Soldiers, All Saints Church

Inside, the baptismal font has served the parishioners for hundreds of years: 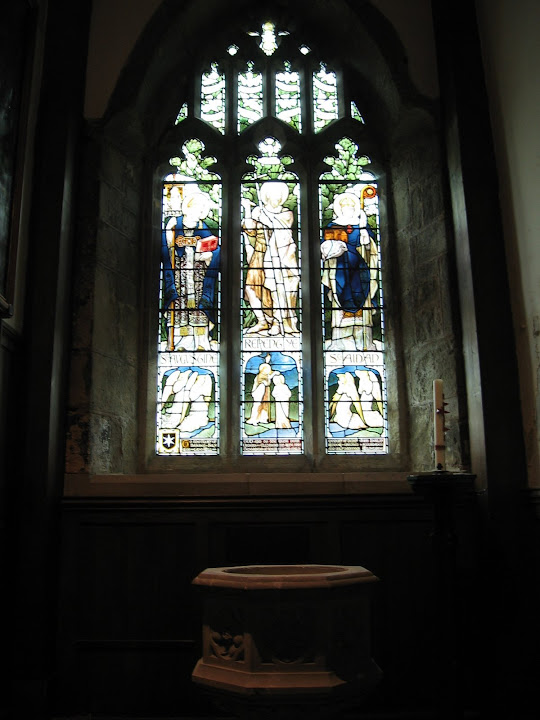 Ripley was mentioned in the Doomsday Book (written in the year 1086) and was originally located on the north bank of the River Nidd. However, in the early 14th century the Ingilby family relocated the village to the north. At that point the Ingilby family constructed Ripley Castle, and have resided there for over 700 years, through 28 generations of Ingilby’s.

The tomb of Sir Thomas Ingilby and his family is inside the church: 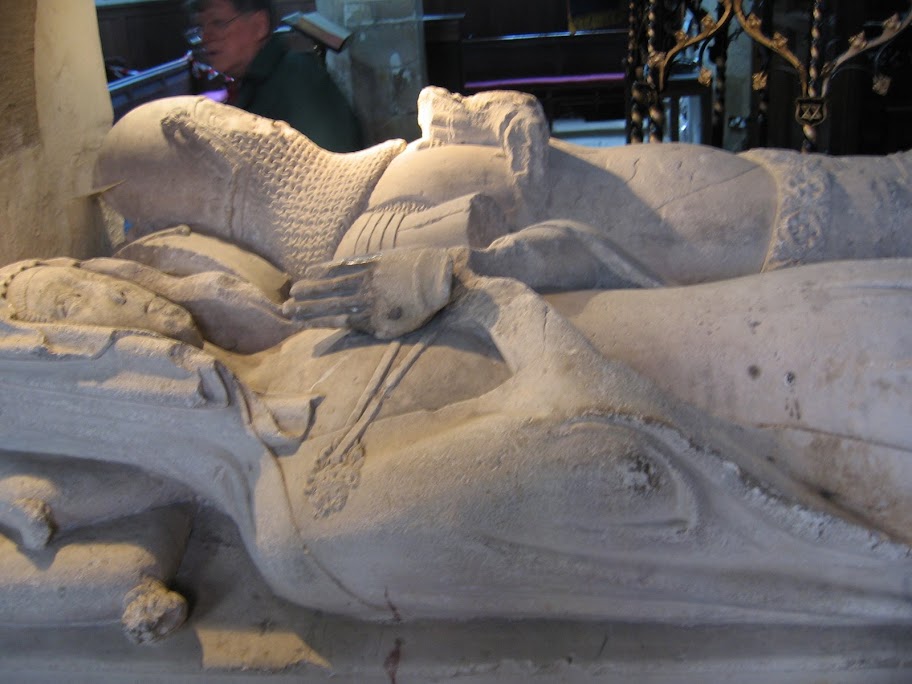 Tomb of Thomas Ingilby of Ripley and his wife. Ingilby saved King Edward III when he fell from his horse in the forest and was nearly gored by a wild boar. Ingilby swiftly killed the boar, which was eaten at the ensuing banquet, and earned a knighthood and family crest for the Ingilbys of Ripley.

The churchyard itself was overgrown at the back, with grass growing tall amongst the gravestones. 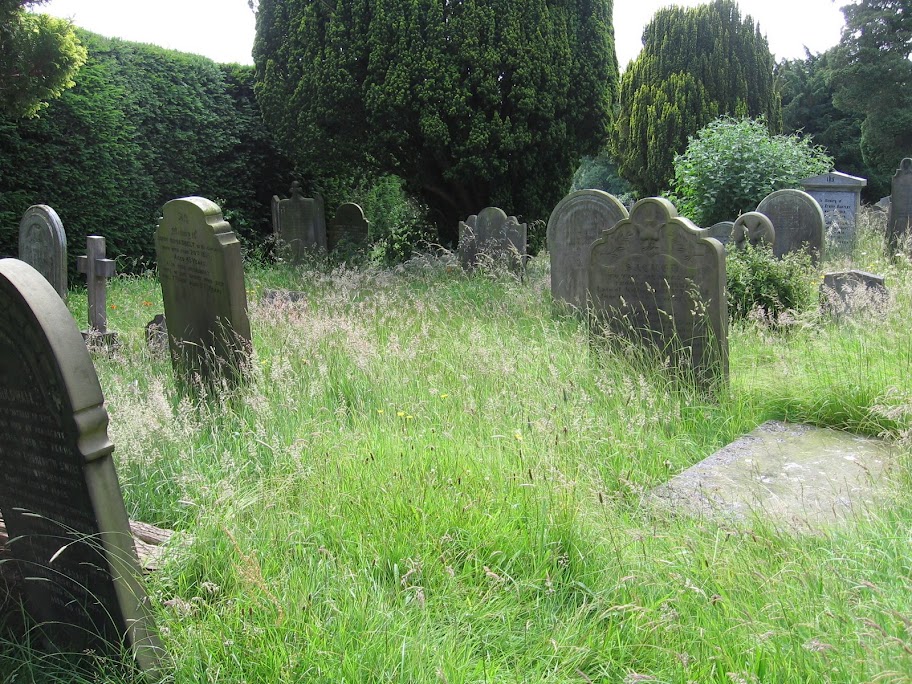 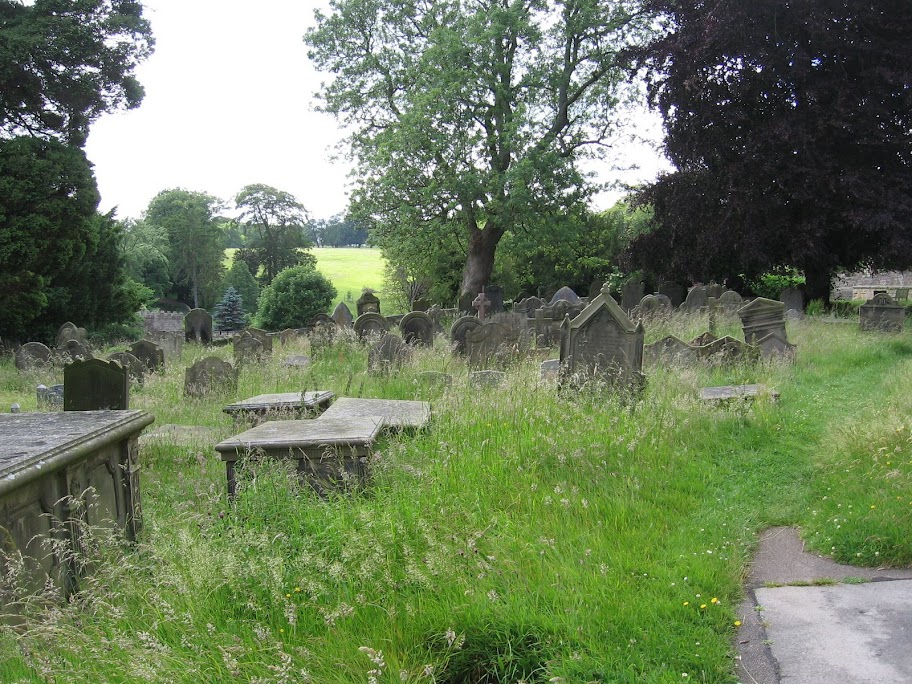 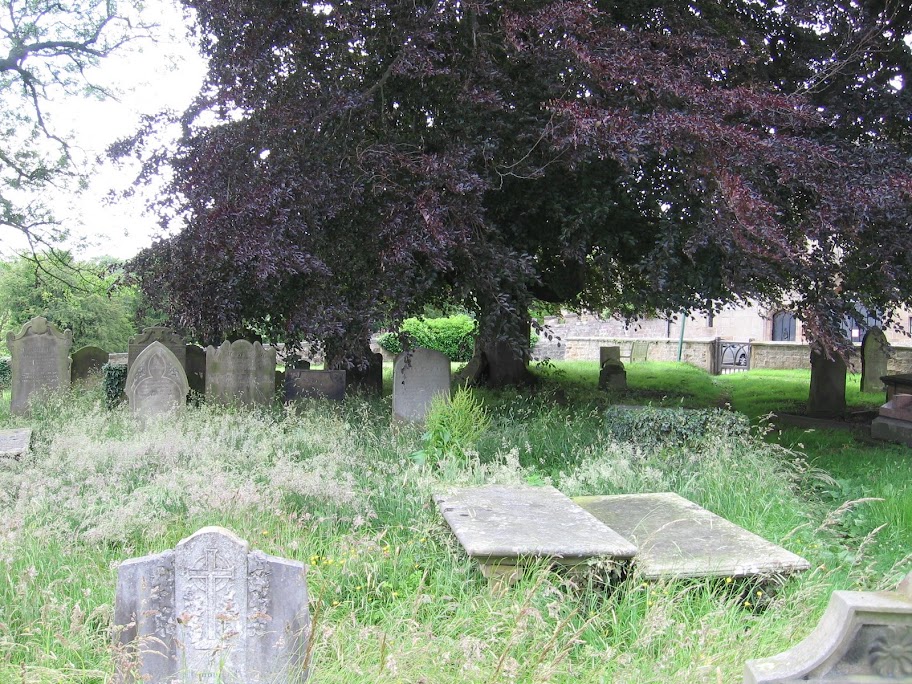 It was in this cemetery that I first noticed an unfortunate trend in numerous gravestones across Yorkshire: the use of a particular type of sandstone that must be incredibly susceptible to erosion. See James Harrison’s gravestone as an example: 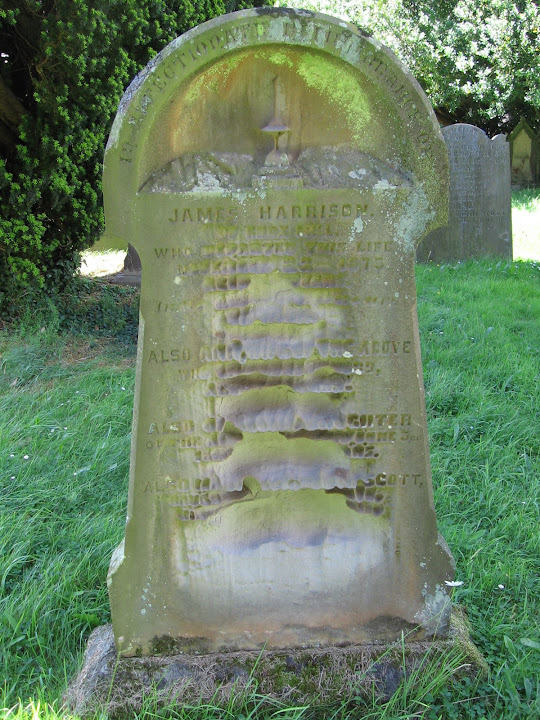 Eroded Gravestone of James Harrison (d. 1875) and other Family Members

There were some beautiful monuments, such as Elizabeth Brown (d. 1857): 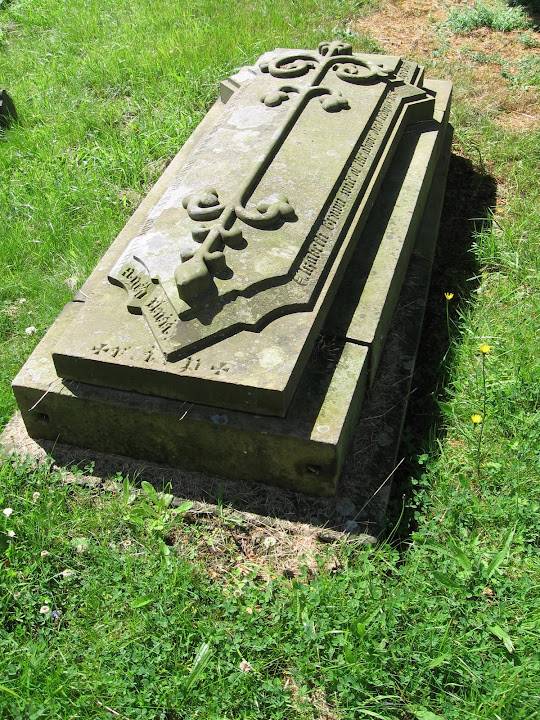 But many stones were neglected and fallen over, like George Wood Ripley and his family: 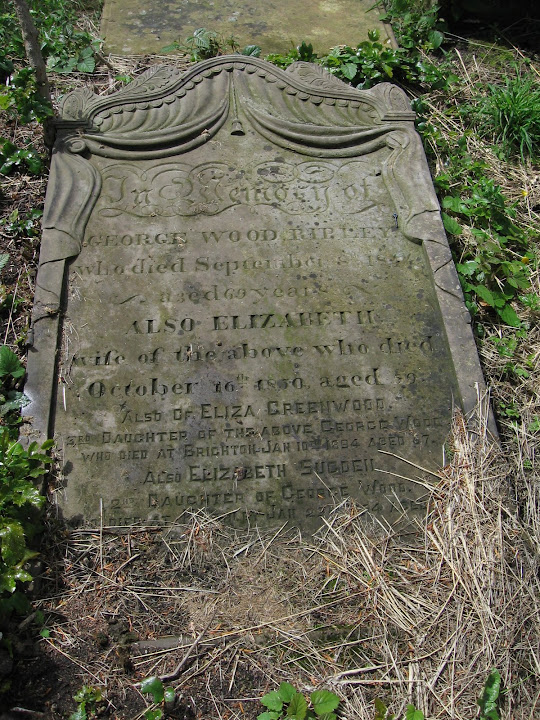 Gravestone of George Wood of Ripley, wife Elizabeth and Daughters

Pieces of broken monuments were placed along the churchwalls: 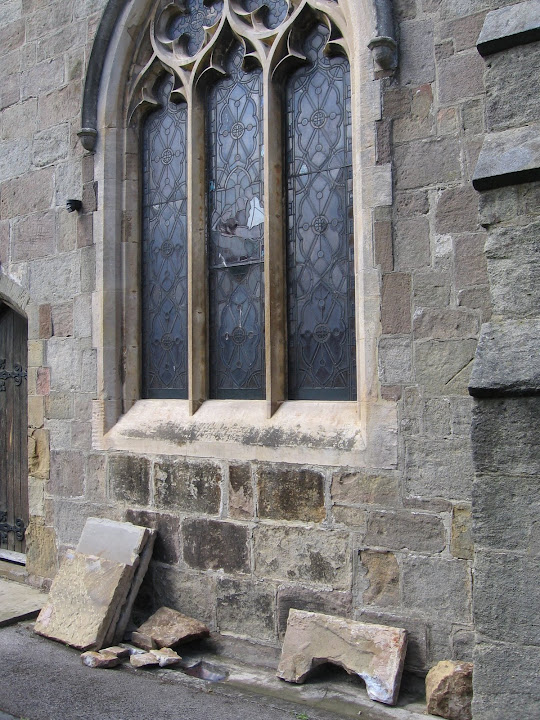 And some pieces of gravestones lay scattered in the overgrown gradd: 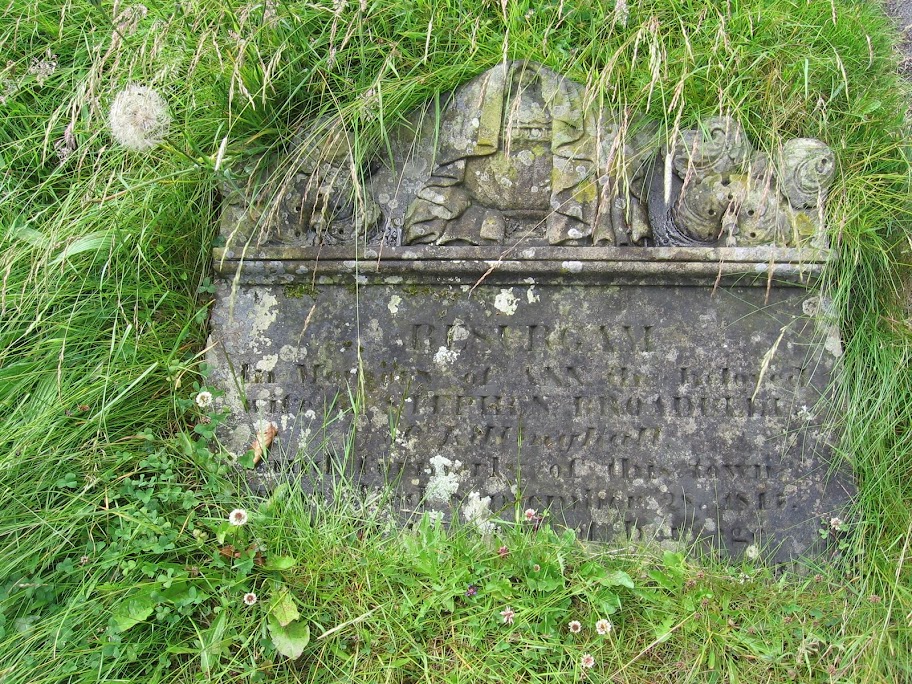 Broken Gravestone of Ann, the wife of Stephen Broad[elim?]

There were some lovely examples of gravestone art, such as this decorative angel blowing a trumpet on the family gravestone of George Bradfield: 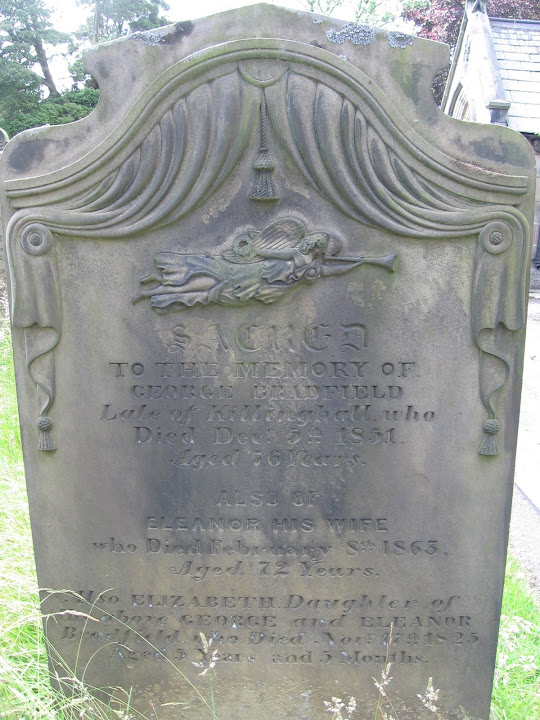 Or this possible crossing olive branches with a flower bud on the gravestone of Richard Pawson (d. 1857) and wife Jane (d. 1880): 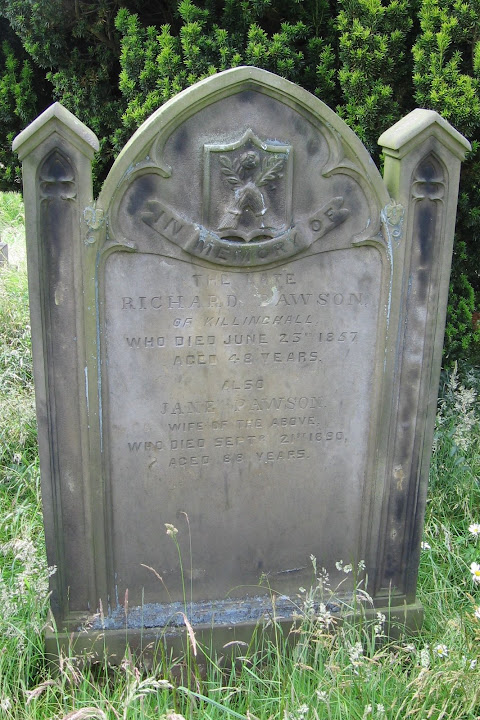 A forlorn-looking man sits on a chair above the gravestone of 25 year old William Holmes (d. 1851) 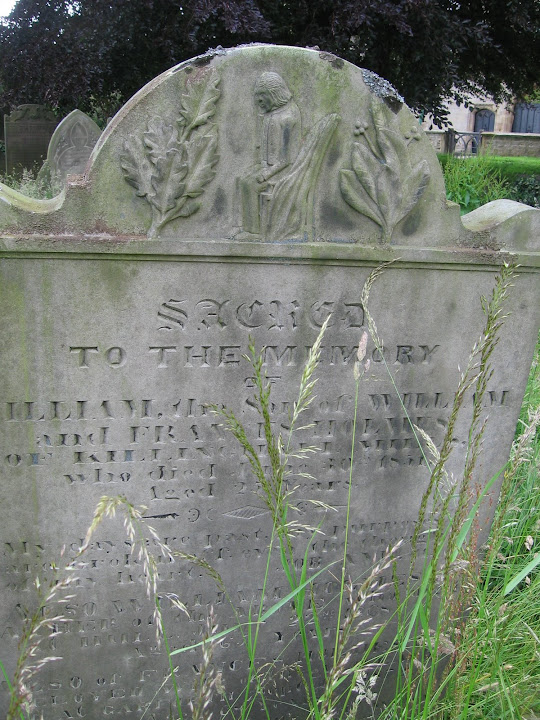 The churchyard itself was peaceful and quiet, though very close to the popular tourist attraction of Ripley Castle and its gardens. And although it seemed a big neglected and could do with a cleanup, it at least has avoided the horrible fate of several other churchyards and cemeteries in Yorkshire who have completely removed gravestones from the grounds and either placed the stones flat to create “Stepping stones”, removed to the churchwall to make mowing easier, or allowed the stones to become building blocks for new construction.

First seedling harvest of the season! Salad time!
It's a beautiful day in the neighborhood...
My favorite gravestone symbol courtesy of @gravestonegirls!
I’d be honored if you would join me at my upcoming webinar “Black Families of Revolutionary-era Plymouth, Mass.” For over a decade I have researched the stories of Black families in my home of Plymouth County, Massachusetts, from the arrival of the Mayflower until the Civil War. Day after day in the archives there was such a wealth of detail, so many incredible families, that it was immediately obvious that the scope was too broad. A Hamilton-style “door-stop” biography could be written about every person featured in my book. There is so much Black and Native history to be told, especially about slavery in New England, and the stories are not lost – the primary records are there. But New England has long suppressed its own history. Massachusetts town histories dedicate more word-count to white abolitionists and Underground Railroad houses during a twenty-year period before the Civil War than document its complicity in the slave trade or provide biographies of black families who were enslaved for almost two centuries. These families all fought to build a more equitable society, and their historic calls for justice are just as relevant today. Black history is American history!
Crafted some autumnal succulent and flower flair for my potting bench. Love the meditative process of arranging and creating something beautiful. Fun fact: I am a great-great niece of Revolutionary nurse Molly Stark, who is the namesake of this gorgeous blue pitcher!
Happy Forefathers' Day, Plymouth's annual celebration of the landing of the Mayflower at Plymouth! Learn about the creation of the holiday by the Old Colony Club in 1769, and how partisan controversy over who should organize the event led to the dissolution of the Club in 1773!