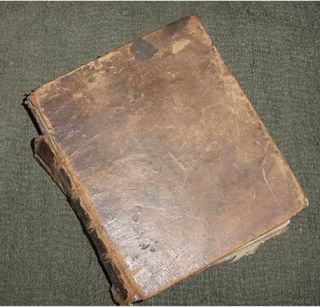 Nathan Munroe Family Bible, Courtesy of Jane Kent
Henry Munroe [variously spelled Munro, Monroe, etc.] Jr. married “Mary Millar” at Pembroke, Plymouth County, Massachusetts, 12 September 1771. Vital Records of Pembrokenotes that no intention was recorded for this couple at Pembroke churches or the Pembroke town clerk. Their marriage was a double wedding, with Henry’s older sister Mary Munroe marrying Jacob Bearce on the same day.
Henry and his sister Mary were the children of Henry Munroe Sr. and Hannah Josselyn, who lived at present-day Main Street in Hanson. Both the families of Henry Munroe Sr. and Jr. were members of the Congregational Church of Hanson (then part of Pembroke) under the leadership of Rev. Gad Hitchcock.
The family bible of Nathan Munroe, the son of Henry Munroe Jr. and Mary Miller provides the following details about Mary Miller:
·         Henry Munro Jr married Mary Millar Sept 12 1771
·         Mrs. Mary Munroe- wife of Henry Munroe died Aug 26 1813 64th year
Read more about this bible at:
http://jskent.blogspot.com/2009/12/munroe-family-bible.html
Pembroke VRs records the death of Mary as: Mary Munro, w. Henry, Aug. 26, 1813, in 64th y.

However, this does not provide her exact birth date [only indicating she was born about 1750] or her parentage.

Joan S. Guilford’s The Monroe Book (Franklin, NC: Genealogy Publishing Services, 1993) p. 320-321 mentions that Henry Munroe’s children “are variously attributed to “Sally”, “Mary”, and “Margaret”, but they are all by Mary. Pembroke VRs list the first five children born to “Henry and Sally Munro” and the next two to “Henry and Mary”, the next to “Henry and Margaret”, then the remaining two to “Henry and Mary”. Gad Hitchcock’s baptism records of the Munroe children all list them as simply the children of Henry Munroe, with no wife’s name listed. However, it does appear to be a matter of the town clerk reporting back variations of Mary’s name, rather than Henry Munroe having four separate wives – there are no subsequent marriages of Henry Munroe, or deaths of additional wives, and in subsequent death records for the children of Henry Munroe, they typically list Mary as their mother [for example, Mary (Munroe) Sturtevant’s death record in Halifax, 6 Oct 1858, listed her as the daughter of Henry and Mary Monroe, despite her birth record stating she was a daughter of Henry and Sally Munro]

After trekking to the Stetson Cemetery down by the Hanson airport, I made my way down a long graveled driveway to a group of houses, set back from Route 27, near the Great Cedar Swamp. Sitting in the “front yard” of these houses rests Hanson’s oldest cemetery, the Munroe cemetery.

The cemetery was first made on the land of Henry Munroe Sr. for his wife Hannah, and two of his children, Bennett and Mercy, all who died in December of 1759 of smallpox.

Over the years the little cemetery grew to accomodate more of the Munroe family, and others connected with them.

It is well preserved to this day, which is understandable considering it can be viewed quite prevalently from the homes near it (unlike the Stetson cemetery, which has been forgotten and neglected).