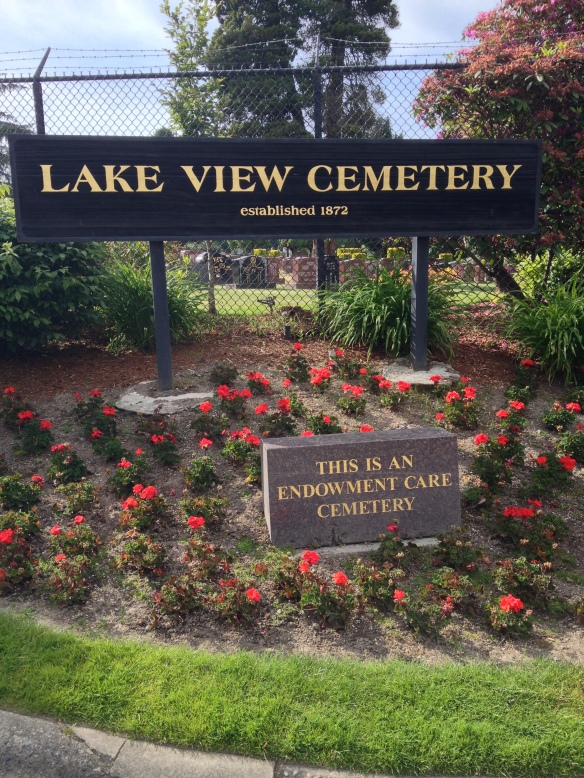 Incorporated on October 16, 1872 as the Seattle Masonic Cemetery, it later changed its name to Lake View Cemetery in 1890. The cemetery is located on the top of Capitol Hill with stunning views of the Cascade and Olympic Mountains, and Lake Union and Lake Washington.

Although the cemetery was incorporated in 1872, it soon became the home of several reburial projects from smaller earlier cemeteries throughout the city. One of the earliest stones located here is the following curious marker:

Members of the Denny Party had moved from Alki Beach [today’s West Seattle] to the western shore of Elliott Bay [modern-day Seattle] in the spring of 1852, and official plats were not submitted to form the official town of Seattle until 1853, so this unnamed burial truly would have been one of the original pioneers. Though his [or her] original burial doesn’t seem to fit into the several known earliest Seattle cemeteries – the first recorded burial at Denny’s Hotel Cemetery was in 1853 (about 20 bodies were buried here, then later removed to the Seattle cemetery); the first recorded burial at Maynard’s Point Cemetery was in 1854 (whose bodies were moved to Seattle Cemetery in 1864); the first recorded burial at the Little White Church Cemetery was in 1856 (whose bodies were moved to Seattle Cemetery). The bodies from these three early cemeteries were moved to the Seattle Cemetery in the 1860s. But when Seattle Cemetery was turned into Denny Park in 1883, those bodies were again moved to Washelli Cemetery [named after a Makah Native American word for “west wind”]. Yet a few short years after the founding of Washelli Cemetery, Seattle converted the grounds into a park called “Lake View Park”, then re-named Volunteer Park in 1903, causing the bodies buried in Washelli to be removed to other cemeteries, including Lake View Cemetery. This therefore caused some families within the course of a few short decades between the 1850s-1880s to have to rebury their deceased loved ones for the fourth time. So someone cared enough to spare the expense of placing a gravestone over the site of this pioneer whose body was likely moved several times before arriving at Lake View Cemetery, despite not knowing his [or her] identity. If anyone out there knows more about this mystery pioneer, I would love to learn more details.

Many of the well known Seattle pioneer families are buried here, including the Denny family and the Yesler family:

Just to the right of the Henry Yesler family plot, is the gravestone of Kikisoblu Sealth, “Princess Angeline”, the daughter of Chief Seattle. Although her father is buried at the Suquamish Cemetery across Puget Sound (which I recently visited and wrote about here), Angeline requested that she be buried by her friends the Yeslers.

Epitaph reads: Princess Angeline Born 1811 Died May 31, 1896
The daughter of Chief Sealth for whom the city of Seattle is named was a life long supporter of the white settlers. She was converted to Christianity and named by Mrs. D. S. Maynard. Princess Angeline befriended the pioneers during the Indian attack upon Seattle on January 26, 1856. At her request she was laid to rest near her protector and friend, Henry L. Yesler. Seattle Historical Society 1958.

The cemetery is also the resting place of Captain Jefferson Davis Howell (nephew of Jefferson Davis), the captain of the SS Pacific which sunk in 1875 and is considered one of the worst maritime disasters on the Pacific coast with a loss of about 275 lives.

Angel on the memorial of the Fairservice family

And just in case you were wondering, Lake View has plenty of spots still available!

We recently visited Suquamish Cemetery beside St. Peter’s Catholic Mission in Suquamish, Kitsap County, Washington on a cold and rainy day. The cemetery is well-known as the burial site of “Chief Seattle” [so-called by Midwestern settlers who founded the city of Seattle and named it in his honor in the 1850s, the title “Chief” was an American title, he was named si?al in Lushootseed]. It is also the burial site of numerous Catholic Suquamish tribe members and related families.

In the early 19th century, Catholic French Canadian trappers were working along the waters and forests of Puget Sound, and several took local Puget Salish or Lushootseed wives. In the 1830s, the Hudson Bay Company established the trading post Fort Nisqually on Puget Sound, and had enough Catholic workers within the company that in 1838, Catholic priests Francis Blanchet and Modeste Demers arrived to serve the Catholic community at Puget Sound. They also served as missionaries to the local Puget Salish tribes. In 1841, Lt. Charles Wilkes of the U.S. Navy remarked that a large white crucifix stood on the beach beside Ol’-Man-House of the Suquamish tribe (a 2,000 year old village site with a large cedar longhouse). Chief Seattle’s father belonged to the Suquamish tribe, and during the 1840s Chief Seattle began attending Masses held at the Ol’Man House and was baptized there, taking the name “Noah Sealth”. In 1861, a Catholic mission church was built above the Ol’Man House village. In 1870 (shortly after the death of Chief Seattle, who died in 1866), the U.S. government burned the Ol’Man House in an effort to have the Suquamish tribe take up farming and spread out into individual land plots rather than a centralized community. The efforts largely failed, as the tribe rebuilt the village and continued to reside at the Ol’Man House village. The federal government then condemned the Ol’Man House site in 1904 with the intentions of building a naval fortification which was never built, and at this time the mission church was destroyed.  Portions of the church, such as the Gothic windows, were salvaged and included in the new St. Peter’s, which was rebuilt next to the Suquamish Cemetery in 1904. The government sold the Old Man House property in 1937 to private development and much of it became vacations homes. In 1950, the Washington Parks department purchased an acre of waterfront property near the site of the Ol’Man House which was donated to the Suquamish tribe in 2004. Several dedication ceremonies and memorials have been held in honor of Chief Seattle which in part have resulted in a number of historic photographs of his grave as well as the cemetery over time. Here is a view of Chief Seattle’s grave and the overgrown cemetery, overlooking St. Peter’s and Puget Sound, taken by famed photograph Asahel Curtis in 1910:

The overgrown tree stumps and brush evident in the 1910 and 1938 photographs are nowhere to be seen today, as the cemetery has expanded as a burial location to the present day, and as various grants over the past century have been obtained to help with landscaping, pathway development, and plaques and sign installation. In 1939 the graveyard was restored by funding from the Federal Works Progress Administration (WPA) and the Suquamish Commercial Club. Using burial records from St. Peter’s Church, the groups made and placed 503 cement grave markers. Over 400 names were carved into the markers, and unidentified graves were noted a stone marked with an X.

Our view of the cemetery was the same as Asahel Curtis’ in 1910: 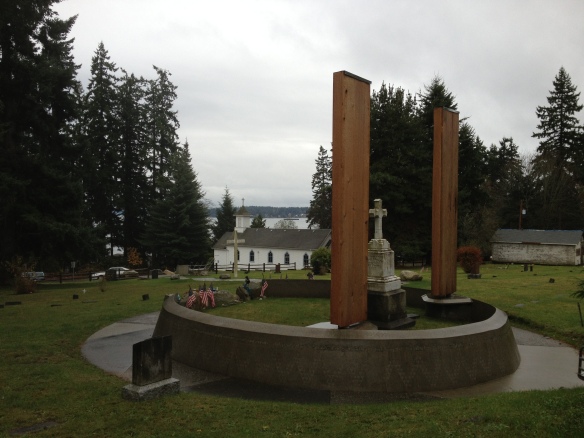 In 1890, a white marble gravestone was placed over Chief Seattle’s burial site by Seattle pioneers, including Arthur Denny, on which they inscribed the following: “”SEATTLE Chief of the Suqampsh and Allied Tribes, Died June 7, 1866. The Firm Friend of the Whites, and for Him the City of Seattle was Named by Its Founders” On the reverse is written: “Baptismal name, Noah Sealth, Age probably 80 years.” In the 1976, a Bicentennial grant funded the construction of cedar poles and two war canoes, carved by Jim and Ernest Chester of the Nitinat and George David of the Nootka, to place by Chief Seattle’s grave. As it deteriorated, recently two 12 foot cedar poles portraying the life of Chief Seattle, created by artist Andrea Wilbur-Sigo, replaced the canoe memorial.

Marker by the entrance to the cemetery recognizing the 2009 renovation of Chief Seattle’s gravesite.

Tributes left along the stone wall by Chief Seattle’s grave.

A plaque marked the recent burial site of “Our Ancestors from Old Man House Village, Returned to Rest In Peace, September 21, 2007, With Others from Our Ancient Village Sites”. The Burke Museum in Seattle for many years had held the remains of  almost a dozen historic Native Americans which had been discovered through construction activities near the site of the Old Man House Village during the past century. The museum had very little in the way of acquisition, provenance, or historical records pertaining to the remains. In 2007, following the Native American Graves Protection and Repatriation Act, the Burke Museum notified the Suquamish tribe and the remains were reburied on 21 September 2007.

Memorial plaque honoring the 11 human remains that had been discovered near the Old Man House Village and held for many years at the Burke Museum. Pursuant to the Native American Graves Protection and Repatriation Act, the remains were reburied at Suquamish Cemetery in 2007.

There were several benches installed throughout the cemetery modeled after historic Suquamish canoes (the silhouette of which is also featured on the marker memorializing the Old Man House burials):

One of several benches installed throughout the cemetery styled as historic Suquamish canoes.

Many of the cemetery’s burial records from the Kitsap County Historical Society Museum are listed at the Suquamish Cemetery’s FindAGrave page.

First garden bloom of the season from @laurelhillcemetery daffodil bulbs! Spring is just around the corner!
Bittersweet morning remotely visiting our family gravestone with the newly added carved name of my beloved father in law after he passed away last year during the pandemic. We used to visit this family gravestone together every Memorial Day to clean and plant flowers. He didn't care much about final arrangements but knew we wanted a place to visit and reflect. This pandemic has taken so much.
First seedling harvest of the season! Salad time!
It's a beautiful day in the neighborhood...
My favorite gravestone symbol courtesy of @gravestonegirls!
I’d be honored if you would join me at my upcoming webinar “Black Families of Revolutionary-era Plymouth, Mass.” For over a decade I have researched the stories of Black families in my home of Plymouth County, Massachusetts, from the arrival of the Mayflower until the Civil War. Day after day in the archives there was such a wealth of detail, so many incredible families, that it was immediately obvious that the scope was too broad. A Hamilton-style “door-stop” biography could be written about every person featured in my book. There is so much Black and Native history to be told, especially about slavery in New England, and the stories are not lost – the primary records are there. But New England has long suppressed its own history. Massachusetts town histories dedicate more word-count to white abolitionists and Underground Railroad houses during a twenty-year period before the Civil War than document its complicity in the slave trade or provide biographies of black families who were enslaved for almost two centuries. These families all fought to build a more equitable society, and their historic calls for justice are just as relevant today. Black history is American history!