In Massachusetts, the nor’easter season typically ends in March. But occasionally a rare late nor’easter occurs in April, bringing heavy rain, hurricane-force winds, and rough seas. On Wednesday, April 17, 1867, an “unparalleled April gale” occurred along the Atlantic ocean off Massachusetts. Four Manomet men died while attempting to rescue the crew of the schooner Charles H. Moller, which became stuck “outside the breakers” south of Manomet Point near Stage Point and Manomet Bluffs, and had been partially wrecked by the storm.

Caught unawares by the storm, the Charles H. Moller came ashore mid-afternoon near Manomet Point, but due to the fact that the ship was “heavily ladened”, it “struck some distance from shore outside the breakers”. Unable to move, the storm continued to pummel the schooner, and its stern and upper works began to break up, which Manomet residents witnessed happening from the shore. Manomet residents feared for the safety of the schooner’s crew.

Just three months earlier, Manomet residents had rescued a crew from the shipwrecked barque Velma, under Capt. Nickerson, 340 tons burden, owned by Baker & Morrill of Boston, which had been driven ashore on the rocks off Manomet Point during a blizzard on Thursday, January 17, 1867. The snow storm was reported as “the most severe one known here for many years.” Velma’s crew “took refuge in the mizzen rigging, where they remained for ten hours, the sea making a breach over the hull.” Due to freezing and dangerous conditions, Velma’s steward and one of its sailors died after falling off Velma’s rigging into the sea and drowning. The Velma had been traveling from Smyrna in the Ottoman Empire (now Turkey) to Boston with mercantile goods valued at $60,000 in gold, including figs and wool. After ten hours had passed, several volunteers from Manomet risked their lives and rowed a lifeboat out to the Velma and successfully saved the remaining crew members. All of the crew were frostbitten, and at the time of rescue it was deemed likely that one sailor would lose both feet, and another sailor would lose both hands.

Lynch and his men “succeeded in getting through the surf safely, and rowed down outside the vessel a mile or more below. Rounding to, they stood in abreast of the vessel and got a line. Being pulled directly to the vessel broadside to the sea by those on board, instead of forging ahead and backing down straight into the wind as they intended, a heavy sea overturned the boat, and all except Briggs were thrown into the water. Nickerson, Carver, and Jordan regained the boat, now righted with Briggs still in, and drifted safely ashore.”

However, James Lynch Sr., James B. Lynch Jr., Amasa Bartlett Jr., and Cromwell F. Holmes could not make it back to the lifeboat as the turbulent sea crashed over them. All four men drowned, “perish[ing] in sight of their parents and houses, and near the vessel whose helpless crew they had so nobly resolved to rescue at the hazard of their own lives.”

With half of the rescue crew dead, the other half helplessly drifting back to shore,  and nightfall quickly arriving, no additional rescue efforts were made on Wednesday, April 17, 1867. The Moller crew spent the stormy night in darkness, trying their best to keep water out of the schooner.

Early the following morning, 32 year old Allen Mellancourt/Mellancoat/Mellencote was anxious to attempt another rescue effort for the crew of the Charles H. Moller, who remained stuck offshore but alive. The weather was still stormy, with intense waves. Allen had been enslaved in Virginia three years previously, and had made his way north to Plymouth at the end of the Civil War. He was a newlywed, and his wife Jennie Cole was nine months pregnant. They had been married two months earlier in the Manomet Church by Rev. George F. Pool in February 1867. Jennie had been enslaved in Baltimore, Maryland, and several of her relatives had escaped slavery prior to the end of the Civil War through the Underground Railroad and made their way to the abolitionist town of Plymouth, Massachusetts. Allen worked as a farm laborer on the recently-constructed homestead farm of Capt. Joseph Simes, and had witnessed the previous day’s rescue efforts from the Simes’ farm.

Allen tried to gather another rescue party from neighboring properties, but no one agreed to go out with him. His neighbors had joined an effort on the beach to search for the four bodies from the previous day’s rescue attempt, who were all still missing. Many were also reluctant to make a second attempt while the storm still swelled the sea, especially considering the previous day’s great cost of life.

Unable to secure backup, and worried the men aboard the wrecked schooner might soon drown, Allen took a fishing dory and rowed out to the schooner alone, risking his life and the possibility of leaving his new wife a widow and his unborn child fatherless. Allen navigated the choppy water, and as he approached the Charles H. Moller, heavy waves hit his dory and he lost one of his oars while trying to prevent his boat from overturning. Witnesses from shore reported that Allen remained calm at this dangerous situation, and was not “daunt[ed] by his perilous position”. With his one remaining oar he steered his skiff back to shore. The Moller crew felt helpless as their second rescue attempt failed. By the time Allen landed back on shore, three of the four bodies had been recovered. Cromwell F. Holmes, Amasa Bartlett Jr., and James B. Lynch Jr. were carried up and prepared for burial the the Manomet Church, while the body of rescue crew leader James Lynch Sr. remained missing in the Plymouth waters. Those who had been searching the shoreline for their bodies reported that “pieces of the stern and bulwarks scattered on the beach indicate” that Moller was “an old and weak craft ill-calculated to stand the strain of such a position long,” and thus the crew was in imminent danger of Moller completely sinking.

Allen Mellancourt’s fishing dory was small enough for him to row alone, had room to fit several crew-members in the rescue attempt, and was likely an easily beach-launched model like the Swampscott Dory. The Swampscott dory shown here was created by Old Wharf Dory in Wellfleet, Mass.

Allen Mellancourt then led a third rescue attempt, this time with the lifeboat that had overturned the previous day. For this attempt Allen was able to recruit a small party of Manomet volunteers who had been impressed by his brave, but unsuccessful, solo rescue mission. Allen risked his life a second time as he led the lifeboat to the Charles H. Moller.  Allen and his men successfully reached the wrecked schooner, and together they “brought the crew safely to land” with no further casualties.

The Plymouth town clerk recorded the deaths of Cromwell F. Holmes, James Lynch Sr., James B. Lynch Jr., and Amasa Bartlett Jr., who all “drowned by the upsetting of a boat” on 17 April 1867.

James Lynch Sr. and his son James B. Lynch were memorialized on the same gravestone. Their epitaph stated that they “Drowned in Plymouth Bay April 17, 1867.”

The epitaph of Cromwell F. Holmes stated that he “Drowned while endeavoring to save the Crew of the Sch’r CHARLES MOLLER, April 17, 1867. Loved son and brother, may we all meet thee in Heaven.” 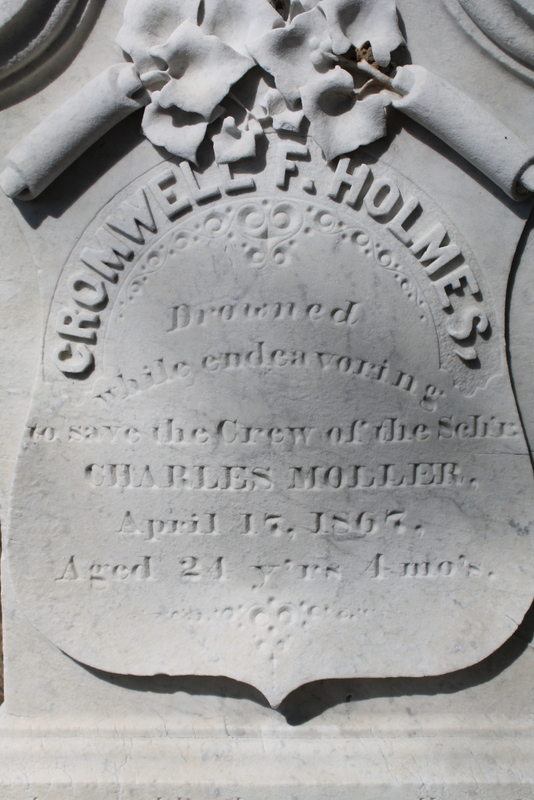 The epitaph of Amasa Bartlett Jr. stated that he “DROWNED while endeavoring to save the crew of the Sch’r CHARLES MOLLER, April 17, 1867. DEATH IS CERTAIN, THE HOUR IS UNSEEN.”

The tragedy made national news. “This most melancholy tragedy has stricken with deepest grief the families and a large circle of neighbors and friends of those brave martyrs to a sacred philanthropy. Possibly for one’s own flesh and blood a man will lay down his life; but he who nobly braves the wild maddened sea in obedience to a sacred sympathy for the helpless stranger, daring and losing all, bears a soul indeed heroic and worthy of highest honor. Lives so offered up are holiest teachings. Such exemplars challenge sacred emulation and elevate a generation in true nobility.”

Allen Mellancourt attended the funerals of the four Manomet men at Manomet Church, mourning their loss. He was thankful that his life had been spared and that he had been able to rescue the crew of the Charles H. Moller almost 24 hours after it had first wrecked off Plymouth. Life soon followed death when Jennie (Cole) Mellancourt gave birth to their firstborn child Daniel W. A. Mellancourt on 29 April 1867, two weeks after the shipwreck. Together Allen and Jennie had seven children until Allen died of consumption a decade later.

The Charles H. Moller disaster led the the construction in 1874 of a Coast Guard station at Manomet Point, which went on to save numerous lives until it was dismantled in 1955.

Garden metamorphosis. Oct 2021 -> July 2021. Cabbage worm -> Cabbage butterfly.
October graveyard wandering...
Happy Pride! Lovely blooms from my garden 🌈
First garden bloom of the season from @laurelhillcemetery daffodil bulbs! Spring is just around the corner!
Bittersweet morning remotely visiting our family gravestone with the newly added carved name of my beloved father in law after he passed away last year during the pandemic. We used to visit this family gravestone together every Memorial Day to clean and plant flowers. He didn't care much about final arrangements but knew we wanted a place to visit and reflect. This pandemic has taken so much.
First seedling harvest of the season! Salad time!