The children of Andrew & Melicen Neal

The carver of this stone has been identified as the “Old Stone Cutter” in the Farber Collection. This is one of the more memorable and dramatic stones in the graveyard, I often stop by it when I am passing by.

Loreto Salvucci, a granite stonecutter from San Donato Val di Comino, Italy, left his home in the Comino Valley – and his usually pregnant wife Carmela (DiBona) four times to come to the U.S. to work in American quarries in 1899, 1904, 1905, and 1909. In 1906, his younger half-brother, Gaetano Salvucci, had moved permanently to the U.S., settling in Quincy, Massachusetts where he worked as a granite polisher. Additionally, Loreto’s mother-in-law Carmela (Paglia) DiBona, and several DiBona in-laws were also living and working in the granite industry Quincy, Mass. by 1900 – along with numerous extended friends and family members from San Donato Val di Comino who also settled in Quincy.

According to the family, Loreto’s wife Carmela and their four children Luigi (b. 1898), Lucio (b. 1903), Raffaele (b. 1906) and baby Eda (b. 1910) immigrated from Italy to Boston to permanently join Loreto and reunite the family. Their next child, Eva, was born at Quincy in 1912. All their remaining children were born in Quincy, and during the ten years after being reunited, Loreto saved his earnings to afford a home of his own in Quincy, having rented several apartments during that time.

With all these details, it seemed natural to assume that the family reunited in Quincy in 1910 and immediately began to settle in to home and work there. I had previously been unable to locate Loreto, either as a solitary granite worker, or with his reunited family in the 1910 Census. However, I knew that Carmela and the kids arrived in Boston in April of 1910, right around the time of the census, so guessed that perhaps they had not yet arrived and Loreto was simply lost in the shuffle or somehow mistranscribed in the census.

But a family photo pointed to a clue: 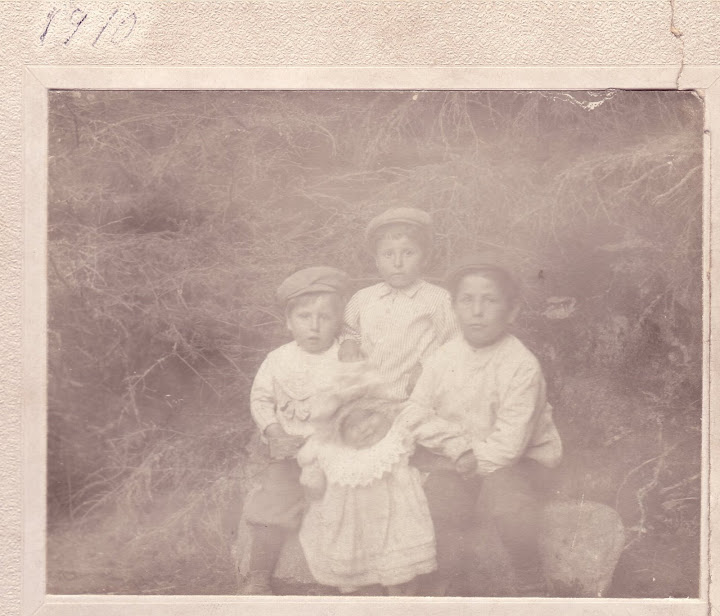 The back of the photograph was labeled: 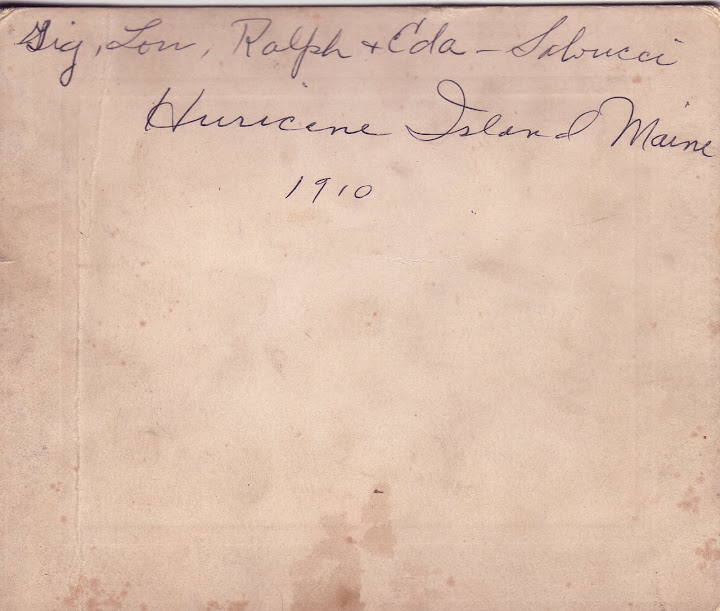 Never assume!! I searched for Knox County, Maine, and located a family whose head of household was transcribed on Ancestry as “Lauis Salwrisi”. This actually showed the family of “Louis” and Carmela Salvucci – both listed as unable to speak English, only Italian. Enumerated 7 May 1910, just a week after Carmela and the Salvucci children arrived in the port of Boston on 28 April 1910 aboard the S.S. Canopic, the language barrier most likely was the cause of numerous errors that the census taker recorded for the family:

They lived in the same dwelling house with two other families – likely it was a three family granite company tenement house.

In 1910, Hurricane Island was essentially a granite town, run by Booth Brothers & Hurricane Island Granite Company, which had been a thriving business until 1900 when demand began to wane and other quarries in New England offered easier access to the granite than an island off the coast of Maine. Hurricane Island granite was known for its pink-gray stone. The last shipment of granite from the island was in 1914, and by 1916 the island had been completely deserted, becoming a ghost town.

But in 1910, the granite company changed management, in an effort to try to revitalize the company, and likely Loreto Salvucci heard of their new job openings through the San Donato network, and hoped, along with the Hurricane Island Granite Company, for a new direction for both his job and newly arrived family. Numerous San Donato granite workers were located in both Quincy and Hurricane Island, passing word of jobs and connections through a wide network of family and friends. According to the history of Hurricane Island, workers earned $1.75-$2.50 per week, which went directly into an account at the company store.

But the granite company struggled, and Loreto must have soon realized the stress of the struggling business was not worth the security of his family, so they returned to Quincy by 1912, where they had a larger support network of friends and family, and easier access to both necessities and comforts than they had found on the tiny island on the ocean off the coast of Maine. Choosing to leave Hurricane Island of their own accord, Loreto Salvucci unknowingly saved the family from the company’s final collapse: Hurricane Island Granite company’s final shipment was a barge of giant granite blocks en route to Rockport, which got caught in a storm on Nov. 8, 1914 and sank to the bottom of Penobscot Bay. That was the final straw for the company which ruined their finances. Management came to the island and announced the closing of the company and town immediately. Tools were left where they dropped.  The workers and families quickly gathered their possessions and got on the boat to the mainland.  All possible equipment was sold, and some still sits on the island abandoned. Several families remained for a few years, gathering abandoned possessions from the company housing tenements, and taking apart the buildings to sell for wood. At least the Salvucci family left on their own terms two years before this situation developed, and went on to prosper in the Quincy community.

Below is a transcription of the inventory of Capt. Henry Josselyn of Pembroke, Mass. He was born at Scituate, Mass., 24 March 1696, the son of Henry Josselyn and Abigail Stockbridge. He married at Pembroke, 23 September 1718, Hannah Oldham. He died at Pembroke by 26 June 1787, when his probate was filed, at the age of 91 years. His eldest child, Hannah Josselyn, married Henry Munroe Sr. at Pembroke on 16 November 1738. The unknown origins of Mary Miller, the wife of their son Henry Munroe Jr., were recently discussed in this blog.

You are hereby impowered and directed to make a just and equal appraisement of all the estate, real and personal, which Henry Josselyn, late of Pembroke, aforesaid, gentleman, deceased, died seized, in lawful money, and make return of this warrant with your doings, under your hands & upon your oaths, as soon as your can. Given under my hand and seal of office at Hanover, this 26th day of June 1787.

An inventory and appraisement of the real & personal estate of which Henry Josselyn, late of Pembroke in the county of Plymouth, gentleman, deceased, died seized, taken by us the subscribers this fourth day of July 1787 by virtue of a warrant from ye Honorable Joseph Cushing, Esqr., Judge of Probate for the County aforesaid, viz –

Plymouth, SS. July 7th 1787. Then Josiah Smith, administrator with the will annexed on the estate of Capt. Henry Josselyn, late of Pembroke, deceased, made oath that this inventory contains all the estate of said deceased, that had come to his knowledge and if hereafter he should know of any other, he will render account of it, the appraisers having also made oath to the same. Before Joseph Cushing, Judge of Probate.

Plymouth, SS. To the Honorable Joseph Cushing, Esqr., Judge of the Probate of Wills &c., for & within the County of Plymouth. Humbly shows, Josiah Smith, administrator with the will annexed of Henry Josselyn, late of Pembroke, gentleman, deceased, that he apprehends said estate is insolvent, therefore, prays commissioners may be appointed to examine the claims thereon & such procedure has as the law in such case has provided and as &c.,

First garden bloom of the season from @laurelhillcemetery daffodil bulbs! Spring is just around the corner!
Bittersweet morning remotely visiting our family gravestone with the newly added carved name of my beloved father in law after he passed away last year during the pandemic. We used to visit this family gravestone together every Memorial Day to clean and plant flowers. He didn't care much about final arrangements but knew we wanted a place to visit and reflect. This pandemic has taken so much.
First seedling harvest of the season! Salad time!
It's a beautiful day in the neighborhood...
My favorite gravestone symbol courtesy of @gravestonegirls!
I’d be honored if you would join me at my upcoming webinar “Black Families of Revolutionary-era Plymouth, Mass.” For over a decade I have researched the stories of Black families in my home of Plymouth County, Massachusetts, from the arrival of the Mayflower until the Civil War. Day after day in the archives there was such a wealth of detail, so many incredible families, that it was immediately obvious that the scope was too broad. A Hamilton-style “door-stop” biography could be written about every person featured in my book. There is so much Black and Native history to be told, especially about slavery in New England, and the stories are not lost – the primary records are there. But New England has long suppressed its own history. Massachusetts town histories dedicate more word-count to white abolitionists and Underground Railroad houses during a twenty-year period before the Civil War than document its complicity in the slave trade or provide biographies of black families who were enslaved for almost two centuries. These families all fought to build a more equitable society, and their historic calls for justice are just as relevant today. Black history is American history!